I have noticed over the years that people recommend watering the garden with water that does not have chlorine in it such as Tap water. The premise of this statement is the bacteria I your soil are a key player in the nutrient cycle and chlorine kills bacteria.
So today I thought today I would test this garden assumption.

The water treatment plant that provides my drinking water has been recognized as using the gold standard for water treatment. After getting the water from the North Saskatchewan River it is initially shocked with Sodium hypochlorite or bleach. This does a great job at killing bacteria and other pathogens that may be in the water. The downside to using bleach is the chlorine decays rather fast once in contact with the water and air.

In order to keep the water safe while shipping ammonia is added to the water creating chloramine. This essentially stabilizes the clean water until it gets to you to make sure it is safe for you to drink.

It is really important to note that even at the highest levels the chemicals used to sterilize and stabilize the drinking water here in Alberta are several orders of magnitude below what is considered to be mildly irritating to humans.
In order to test this garden assumption I have two hypotheses

Chlorine in tap water does harm or kill bacteria in garden soil.

Although the chlorine in tap water may harm bacteria they will recover quickly.

In order to test these two hypothesis we have sent in a number of sample to Maxxam analytics for analysis.

Using standard sterile equipment was provided by the lab provided in order to prevent contamination.

For all soil samples a sampler was used to measure 0.5 grams of soil that was placed in 200 millilitres of deionized water. Deionized water is pure water with absolutely nothing else in it.

Fresh gloves were used for every sample to prevent contamination. Following sampling all containers were firmly sealed and placed in a cooler. Samples were submitted immediately to the lab for analysis unless otherwise stated.

Sample 1 is the control where I sampled a representative area of soil after having removed the mulch layer.

Sample 2 was the same area after having been thoroughly watered using tap water using a standard garden hose and sprayer.

Sample 3 was submitted in order to understand what happens in extreme situations. I placed an untreated soil sample in 200ml of fresh tap water. If tap water is harmful we should see the lowest number of bacteria in this sample.

Hypothesis 2 should show that the same sample 6 hours later will have higher numbers of bacteria then the initial treated sample.

Sample 4 was a separate treatment area from Samples 1, 2 and 3 but still representative of the same conditions. The sample was placed in the water and care was taken to keep the temperatures similar to the soils. This let me best replicate the soil conditions and if rebound of bacteria numbers was to occur. The sample was than left for 6 hours prior to submission to the lab with the rest of the samples.

Chlorine evaporates when in contact with the air. So when you leave out a bucket of water or use a hose similar to mine that sprays the water out increasing its exposure to air it should evaporate chlorine. In order to get a better understanding of what is actually hitting my garden we sent in three more samples for chlorine analysis.

Sample 5 is fresh tap water. This will let us establish what the initial levels of chlorine are after being delivered to our homes.

Sample 6 was tap water that is 12 hours old and should show a drop in the concentration of chlorine content. This sample was treated similar to sample 4.

Sample 7 is Fresh Tap water collected after being sprayed from a garden hose similar to watering a garden this should show the volatilization that occurs when tap water is used to water a garden.

Soil bacteria numbers were counted using a plate count technique. After consulting with experts there is an expected error rate of + or – 300 on the results. So if the numbers are not more than 300 apart from each other they are considered to be duplicate results. All results are in Colony-forming Units Per Milliliter.

This does not support our hypothesis as these results are nearly identical.

After 6 hours sample 4 also had an result of 1100 CFU/mL that would be considered identical to both the control and initial treatment.

Does the extreme situation of sample 3 where we took the same soil sample and placed it directly in fresh tap water show a decline? It had a result of 1200 CFU/mL so once again with in the error rate of being identical to the control.

So what does this all mean? Our results suggest that tap water at least consistently across Canada does not harm the bacteria in our garden soils.
Water Results

Although the chlorine does not hurt bacteria in soil what are the Chlorine levels that are hitting your soil and does leaving tap water out or using a sprayer help to reduce the concentrations of chlorine? Lets take a look at the results of the chlorine testes on the water samples. All results are in milligrams per liter.

Sample 5 was our fresh tap water and had an reading of 2.0 mg/L

In order to see if the results are statistically different we used a Real Percent Difference analysis.

Sample 6 that had been sitting out for 12 hours had a reading of 1.4 mg/L and does look lower than the fresh tap waters 2.0mg/L however it is considered statistically to be the same.

Sample 7 taken from the end of my fairly standard garden hose and had a reading of 1.3 and again was not statistically different from the fresh tap water. It would likely take a few days for the rest of the Chlorine to completely evaporate along with any remaining ammonia.

I am confident with these results that using tap water in my garden does not reduce the number of bacteria in the soil. In light of this I feel comfortable continuing to water my garden with tap water when needed without removing the choline through filtration or evaporation.

Other water treatment plants may use different techniques or chemical concentration that may impact different soils in different ways. In order to apply today’s findings to a larger area I would have to replicate this experiment many more times. More research is required.

The first Friday of each month I am going to reserve for the testing garden assumptions video series where we look at garden practices, methods and products. Make sure to check out the last video in this series were we investigated if Epsom salt is beneficial in organic gardening. Next time we are going to take a look at Tea and Tea leaves as a potential organic fertilizer source. 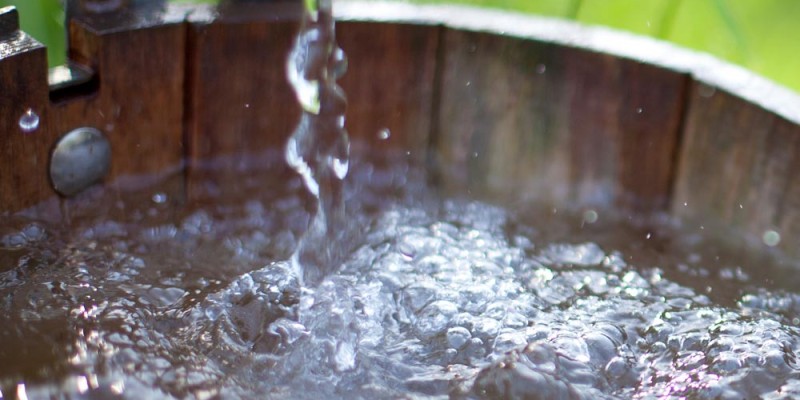